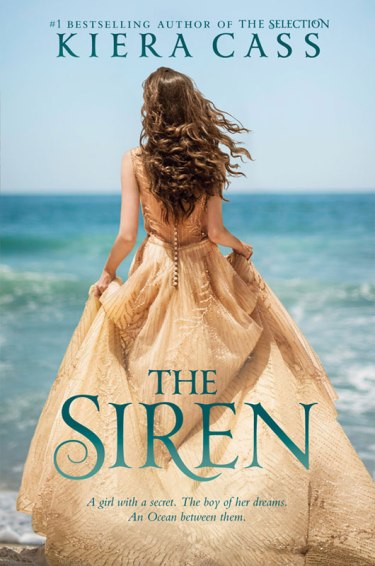 The Siren by Kiera Cass

I will start off by saying that I know that this novel by Kiera Cass was not actually a new release. It was a republishing of her first novel, being rereleased due to the high success of her Selection Series. I greatly enjoy The Selection and it’s sequels. I may not believe that they are the most thought provoking or earth shattering, but they tell a fun story that is a greatly enjoyable read. I went into The Siren with the same expectations. This novel is a standalone, with no planned sequels or additions to the universe. And the book progresses and ends in such a way as you are completely contented with the ending. Without giving too much away 🙂

This book follows a 19 (or 100 depending on how you look at it) year old girl named Kahlen who is a Siren for the Ocean. She has been a Siren for 81 years along with a few other girls, each of them serving as a Siren for the Ocean for a total of 100 years. Despite being almost done with her sentence as a Siren (in a manner of speaking) Kahlen is unhappy and feels as though her life is missing something. This book follows her over a year of her life trying to come to terms with what it would mean to be a Siren who falls in love with a mortal. The love story is sweet and you easily find yourself feeling all the happiness and sadness that Kahlen goes through at various points in the book. Her supporting cast of characters do not get as fleshed out as I would have liked, but they are definitely not brushed aside by any standard. They stand by Kahlen in everything that happens and you definitely are left with the feeling that these girls, the younger and the older, definitely think of themselves as something more than sisters. They are the only girls in the world who can understand what the others are going through and they will protect each other fiercely, no matter what the cost.

All in all I enjoyed this novel, as I believe I would always have a good time reading things that Kiera Cass writes. I am looking forward to The Crown, which is the final book (as far as I know) in The Selection series.

I love books! I spent 8 years working in a bookstore, which was great for finding new titles and getting bookish discounts. It however was not great for my wallet in the long run! Now I work at a school and read every spare moment I get! View all posts by Maren @ MarenBoBarenReads

Time to fangirl!!! #victoriaaveyard #redqueen #realmbreaker
Loved this edition into the Once Upon a Con series! Book 3 just arrived in my mailbox yesterday, can't wait to bust into it! Review up on the blog! Marenbobarenreads.com 💜💙
Its been a while since I've done a proper Bookstagram post. I didnt realize how much I had missed it until I was setting up my photo shoot for this one! I was lucky to receive Pride and Premeditation as an ARC from netgalley, this wonderful book comes out March 2021!
New blog post up for Goodreads Monday featuring Maria Snyder's Sentinels of the Galaxy series!